Advertisements
Skip to content
Keenan Booker 4 years ago 10 min read
Well, well, well, first it’s a kid who contracted the plague. Now we have a woman who claims to feel as if she was treated like a leper. “A Leper?” (The audience asks in surprise.) Yes, children, that’s right, the good ole’ Biblical reference to a leper. There truly cannot be a Medieval society without a leper and I will also include the ancient Orient.

The Leper was the first to be excommunicated from society. He was a host to the plague, a sore to the eye and the origin to the beggars and vagabonds. The Leprosy disease rots your finger and toes away. It will deteriorate your nose and create large cancres on your head, which look like moon craters. It will weaken your bones drastically. Lazarus, the man who Jesus healed from leprosy is the patron saint of all lepers. Medieval hospitals created for lepers were called Lazar Houses. Vlad The Impaler is noted for creating a facsimile house for a dinner where he invited all the beggars, vagabonds, and lepers to the home. After dinner, he left the home, locked it, and set it a fire. Similar occurrences were enacted many times by different kings throughout Europe. Leprosy was considered incurable and a consequence from God for your evil deeds.

Today’s scholars can’t tell the difference between leprosy and syphilis of the old world. Both diseases are documented to encourage insanity as well. A lot of societal elements were blamed on the monk cloth wearing lepers. After the Jews, this was the group that took the blame. Personally, I’ve witnessed leprosy on people in today’s society. As in the old world, the shame of the disfigurement and stares from the populace will make them cover themselves. Leprosy affects the whole body and comes from close interaction with armadillos. The form of leprosy that will reemerge in today’s time will make the skin look as if it has little tea bags hanging from it. The tea bags will be of various sizes. You can find out more about the disease of leprosy in my book Kicked Out of Heaven Vol. II. 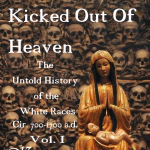 Synthony Of Destruction by Waves_On_Waves and Others