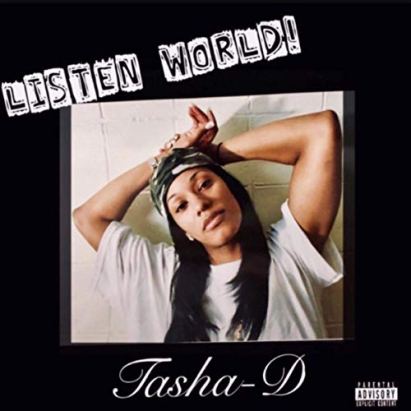 Originally from Columbia Point Projects in Boston, Massachusetts, the multi-talented producer, and rap artist Tasha-D steps to the forefront with a riveting and bar-explosive track titled Listen World! Tasha-D was molded by the charms of rap music’s classic era, as this Renaissance woman of the post-modern era is Making her talents known with messages that need to be heard.

Produced by Tasha-D herself, Listen World! possesses an infallible groove draped in the essence of pure rawness. Tasha-D’s witty metaphors and blunt intellect unveil her roots in the craft of lyricism as an emcee of traditional caliber. Tasha-D spits over a musical landscape filled with hard-hitting terrain and drums that clap like guns on a battlefield. For those that like it with an “as real as it gets attitude” will understand the importance of Tasha-D’s work and the nostalgia, it puts back into the music we love the most.