Be Yourself by Ridikule – A Masterpiece In The Making

Originally from Long Beach, California, entertainer, entrepreneur, and songwriter Ridikule is a living testimony that hard work pays off. The Renaissance man of the post-modern Hip Hop era is electrifying audiences worldwide with his new album Be Yourself. Ridikule’s authenticity is seen in his true-to-life raps that embrace a positive view on life. 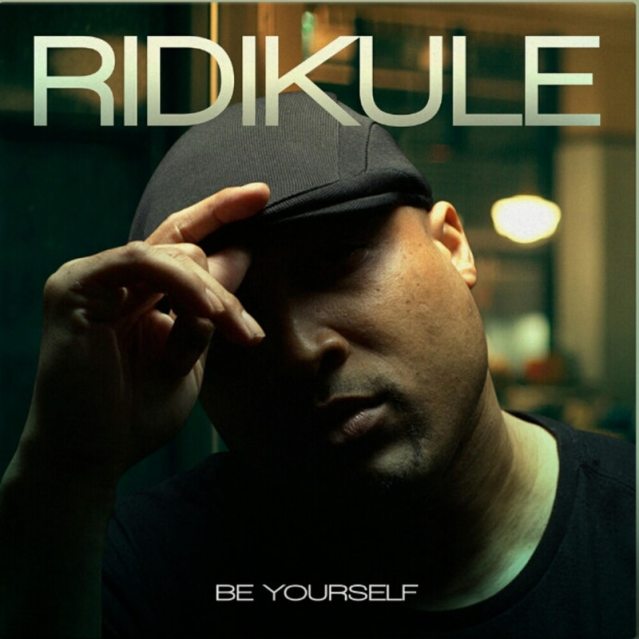 Be Yourself is a foolproof album comprised of twenty-three tracks, seven of which are skits that work brilliantly for the evolvement of the album’s theme. Be Yourself is a symphonic journey into our core beliefs and uncompromising faith in life. The album’s production is flawless and there are many places that rewind-button addicts will take delight. Below is a review Be Yourself by Ridikule

Be Yourself (featuring Ellen Hirota) – The title track proves to be the perfect opening tune. Ridikule lets us know that he’s in it to win it with a lyrical flow that is clear and concise. Ridikule’s vocal tone is somewhat reminiscent to Redman, but he quickly carves out his own platform with original content and metaphoric delivery. Ellen Hirota puts the icing on the cake with a killer hook.

Walking on the Sky (featuring Tracy Lane) A tremendous track that makes you feel as good as the title. Ridikule’s lyrics are a startling verse-by-verse braggadocios pickup line for all the beautiful ladies in the crowd. The beat is energetic, keeping you hypnotized in head-nod mode, another classic from Ridikule.

Addicted – The ear-candy appeal of the piano riff and other keyboard samples make Addicted memorable. Ridikule reveals his love for music through rhymes that display a wide range of urban terminology. Listeners get to witness the skills of the proverbial master in raw fashion. It’s just Ridikule one-on-one and his microphone.

Light’m Up – As a warrior of wordplay, Ridikule is able to change the pace of his verbal jargon like a car shifting gears. In Light’m Up we see an emcee fearlessly giving it his all, which is what makes this track shine.

Did It My Way – One thing that I really enjoy about the Be Yourself album is Ridikule’s sincerity, which permeates throughout the entire project. Did It My Way is Ridikule’s method of bringing his audience into the room with him for an autobiographical discussion.

American Pie – Ridikule authenticates his perspectives about life and music over this ariose groove called American Pie. The song is a good reminder that the “struggle” continues in the dumb-down era; wherein those who find their true purpose in life and follow its course will survive.

Act A Fool – This is a festive track. The hook is catchy and the rhythm puts the listener at the party with pints of liquor and other traditional party favorites. Act A Fool is a free feel song that is about being instinctual and enjoying the moment.

Beautiful Girl (featuring Tracy Lane) – This is rap music at its finest. Beautiful Girl makes a diamond in the rough flash like a gold nugget. Not only is this one of Ridikule’s most impressive offerings, but the track’s sentimental value is furthered enhanced by its preceding skit containing some choice words from Tupac Shakur. Tracy Lane puts the finishing touches in song on Beautiful Girl. This is as real as real gets and a reminder that it’s a still about man and woman.

Turn’d UP – As another favorite from the Be Yourself treasure chest, Ridikule truly possesses the best of both worlds, good lyrics, and equally transcending music. Ridikule goes in on keeping his focus in taking the lead in making the dreams of life come true.

No Stress – The track’s title is a clear indication that this is going to be one of those ways in which we can relax with our significant other. Letting the stresses of the day go in efforts of removing the barrier that separates us from our loved ones is the platform for Ridikule’s phraseology.

Am I Losen You (featuring Tracy Lane) – At this point in the album it becomes evident that Ridikule’s work with Tracy Lane is bound to have an epic outcome. Ridikule’s mouthwatering recipe for creating songs that read like books comes to the fore with Am I Losen You. This rap song is a full plate of concern for all those couples that aspire to maintain their relationship even though the initial spark has dwindled.

Gotta Let’m Go – Ridikule covers many aspects of love on the Be Yourself album. However, we find Gotta Let’m Go cries out to the unevenly yoked among us and people trying to make a relationship that isn’t working an excuse for boredom. Musically, the track has an organic feel with a funky guitar lead that will keep any music enthusiast entertained.

Mininmum Wage – You got to love Ridikule’s originality. Mininmum Wage is a really cool rap song. Instead of glorifying the art of drug dealing, Ridikule keeps it realer than most by rapping about having a minimum wage job at a fast food restaurant and doing things the honest way. Everybody can eat off of Mininmum Wage.

Fame & Money – A clever song about the ills that usually come with trying to obtain fame and money; “to gain it all some people lose everybody” as Ridikule rhymes. Now that makes sense.

That’s Just How It Is – Ridikule delivers a timely message for everyone in the struggle and the need to work together to overcome the obstacles placed before us. That’s Just How It Is has nostalgic overtones that act as a hazy flashback of remembering where we are in life and our society.

Family Matters – Ridikule fittingly sums up a masterful work with a track that perfectly embodies the journey that the album’s title invokes. Family Matters is one of the best rap songs of the century.

Be Yourself by Ridikule is a masterpiece! The lyrics and production meet a standard of perfection that we seldom witness in any musical genre, let alone rap music. The album is uplifting and has a message that sparks the best of us to recognize the best in them. Thanks, Ridikule!

Be Yourself by Ridikule on Bandcamp